Danuta is 65 and has been retired for the last five years. She is now single with four children and four grandsons (aged 7,6,4 and 4). She was previously an English and Drama teacher but then specialised in special needs education and moved into senior management.

Her parents were both Polish and survivors of the Second World War. Her father was commended for his involvement in the D-day landings and her mother was involved in the Warsaw Uprising of 1944, before being sent to a concentration camp. They died some years ago, but their legacy was to pass on a strong belief in saving and managing money carefully.

Why did Danuta choose to work with Blue Ocean?

Danuta had already worked with a financial adviser who had been introduced via her employer. However, when he decided to retire, he recommended that she work with John Doyle, who then went on to establish Blue Ocean.

John Doyle has since handled all aspects of Danuta’s financial planning, including mortgages, pensions and other investments such as ISAs.

Most recently, John has advised Danuta on an income ISA, designed to bridge the gap in her income until she can claim the State pension. John has helped in other ways, for example by recommending a solicitor who has provided an excellent service.

How has Danuta benefited?

Danuta enjoys being in retirement, especially now she has the time to spend on her hobbies. She paints botanical watercolours and does lacemaking and sewing. She is an avid reader of all types of literature, and loves spending time with her four grandsons.

What Danuta really appreciates is the feeling of safety. In her words: “I like knowing that there is somebody there who will answer my questions and get back to me straight away.

Blue Ocean has a fantastic support team and you know that you’re being looked after. I don’t have a great deal of money, but I feel like a millionaire! Blue Ocean provides a personal touch – the whole team is kind and empathetic. I don’t need to contact them all of the time, but they are there when I need them.

I trust John implicitly; he’s a very honest and hardworking man and is always looking out for my best interests. He has never given bad advice and there are lots of things I wouldn’t have been able to do without his advice and guidance. He’s my safety-net and I’ve recommended him to lots of my friends.”

Danuta is looking forward to receiving her State pension in the next few months which will mean that she can go abroad once in a while, as well as gift more money to her grandchildren. 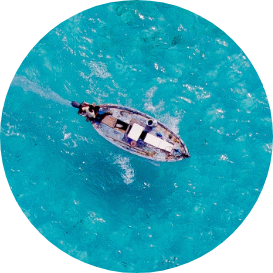